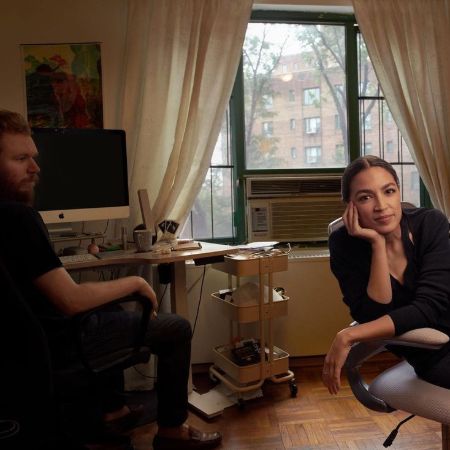 
Do you know who the youngest woman ever to serve in the United States Congress is? Well, she is Alexandria Ocasio-Cortez. She is also known by her initials AOC.

Further, go through this article till the end to know the relation between AOC and Riley Roberts!

Who is Riley Roberts?

Born in 1988 in a southwestern U.S. state, Arizona, well known for the Grand Canyon, the mile-deep chasm carved by the Colorado River. Riley Roberts is an incredible web developer.

Roberts is a 33 years old charming man who graduated from the prestigious Boston University with dual degrees in sociology and finance.

Before that, he attended Chaparral High School in Scottsdale, AZ. His mother is Connie Roberts and works as a real estate agent in Arizona.

In addition to being a web developer, Riley is a loving and super supportive boyfriend of an American politician, activist, and economist, AOC. Am I excited to know about this lovey-dovey pair?

Together for a half-decade now

Roberts and Ocasio-Cortez met while studying at Boston University in a weekly Friday afternoon conversation hosted by the dean at BU, called Coffee and Conversation.AOC describes their acquaintance as a “true nerdy fashion.”

In coffee and Conversation, Students explored everything from the definition of love to current events. Ocasio-Cortez frequently drove the sessions, concluding with thoughtful conclusions that included her new spin on the subject.

At the same time, Roberts was a philosopher type, and he would be in the corner of the room thinking things through and quieter.

Finally, The duo fell head over heels after getting to know each other through the Friday talks. They were the supersmart and secretive couple.

Some classmates didn’t realize they were dating until several years after they all graduated from college.

Riley Roberts and AOC did break up.

Sadly, the secretive pair split up after graduation, and Roberts returned to Arizona. He spent a significant amount of time there working with companies on web design and advertising.

As the tale goes, when love is real, it finds its way. Roberts and Ocasio-Cortez eventually rekindled their relationship. He moved to Newyork to be with her, and they shared an apartment. The pair have been together ever since.

Riley Robert has been a massive supporter of Ocasio-Cortez. He has been a precious partner in every way, from the emotional to the strategic to the practical.

Their relationship is shown in the Netflix documentary Knock Down the House, featuring four women running for Congress in 2018. Yet Robert prefers to stay out of the spotlight.

Do they plan on marrying?

Even though the couple hasn’t spilled the beans whether they plan to marry or have children, their parents are thrilled that the web developer and politician are together. Ocasio-Cortez’s mom Blanca expressed how much she wants the couple to get engaged in an interview with the Daily Mail.

It doesn’t appear that Roberts has his own social media account and loves remaining silent yet supportive. He actively participates on social media with his lover; he discussed AOC’s Instagram stories about tackling racism.