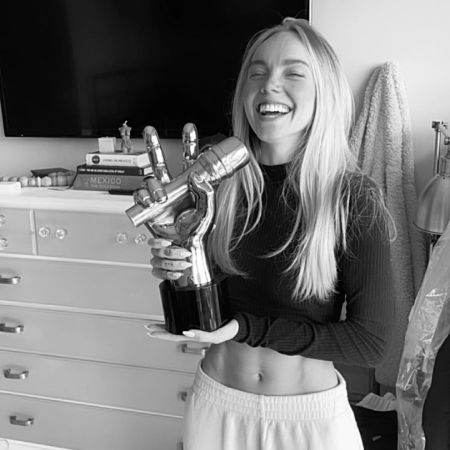 Have you been on a journey to one of America’s most popular reality competitions, The Voice? If yes, you might be familiar with Danielle Bradbery.

Danielle Bradbery participated in The Voice in 2013, and guess what? She won The voice season four! Moreover, she is the youngest artist to win the competition. Bradbery has been making a name for herself since winning season 4 of NBC’s “The Voice.”

Further, Grab every detail of the winner here! Also, know if she’s dating? And How wealthy is she?

Texas native Bradabery was only 16 years old when she won The Voice Season 4 in 2013, making her the show’s youngest champion in four years.

After capturing everyone’s attention in the blind auditions with a performance of Taylor Swift’s “Mean,” Bradbery joined Blake Shelton’s team. She bravely flew her country music flag with excellent interpretations of songs such as Jesus Take the Wheel, Maybe It Was Memphis, and Born to Fly.

Despite her youth, Danielle Bradbery was able to put together an album quickly. Her self-titled debut was published in November 2013, debuting at #19 on the Billboard Top 100 charts and selling approximately 139,000 copies.

She went on to tour with Hunter Hayes, Miranda Lambert, and Thomas Rhett for several years. Bradbery’s second album, I Don’t Believe We’ve Met, was published in 2017. It charted at #6 on the country charts, despite selling much fewer copies than her debut.

Is the Singer dating? Who is her boyfriend?

Yes! The talented and gorgeous lady has been in a healthy relationship for almost three years. Singer Danielle is dating a handsome hunk, Bennett Jones.

He is passionate about golfing, fishing, surfing, skating and is an avid cars lover.

Even though Danielle and Bennett are pretty upfront about their relationship on social media, sadly, the pair has not spilled the beans about their love story.

As per their Instagram posts, The two started dating back in 2019, as their first picture together is from 2019.

Danielle Bradbery even wrote a song that relates to her relationship with her handsome boyfriend. The song is a love song, “Never Have I Ever,” released during the pandemic 2020.

And, while some relationships have undoubtedly been put to the test during this quarantine and pandemic, she claims hers has only flourished while she’s been off the road.

She also states that falling in love has impacted her songwriting process and her perception of herself as an artist.

“Now that I’m in a wonderful, healthy relationship, he’s very supportive of what I do, isn’t jealous, and is just all, ‘You go be Danielle Bradbery,’” she adds.

It makes such a big difference and gives me greater confidence. It’s like night and day when I’m creating or recording a song. You can probably hear how self-assured I am. I feel more like myself.

Born in 1996, Singer Bradbery is about 25 years old and zodiac Leo. She is a young, bold, beautiful lady standing 1.68 m tall and weighs approximately 52 kg.

She has silky blonde hair and glorious blue eyes, and a perfect slim body.

Likewise, her loving and supportive boyfriend is indeed a handsome hunk standing approx 6 feet tall. He has Dark brown hair and brown eyes, and cool tattoos on his body.

Talking about Instagram, The lovely pair are active as @bennett_jonas and @daniellebradbery. They have enormous fan followers of 14.9k and 487 k followers, respectively.

A 25-year-old singer is battling Chronic Migraines. She says to PEOPLE, The beginning was when she was sitting up and her eyes and head, ears were throbbing.

Bradbery had more than 20 migraines in the previous year, each lasting two or three days. She usually gets them twice a month.

She explained, “I didn’t know what was wrong with me – I had a headache virtually every day,” “It was just a stage in her life she had to get through.”

In conclusion, She wants other migraine sufferers to know that they are not alone and that she, too, struggles.

How rich is Danielle Bradbery? Know her Networth and Albums.

With her sophomore album I DON’T BELIEVE WE’VE MET, Bradbery, for the first time, blended her story into her songs — penning seven of the album’s ten tracks, including “Worth It,” “Potential,” and GOLD-certified “Sway.”

Danielle began a new chapter last year by infusing her own heartfelt and intimate stories into her latest releases, “Never Have I Ever” and Girls In My Hometown.

The strong voice expanded her incredible range even further by recruiting Latin GRAMMY® nominated artist KURT for a Spanish version of Never Have I Ever (Yo Nunca He…), singing totally in Spanish for the first time.

Danielle reveals a side of herself we’ve never seen before in a fierce coming-of-age proclamation in her latest release, Stop Draggin’ Your Boots.

She takes the put-up-or-shut-up honky-tonk shuffle a step further with a boot-stomping video that embodies the song’s combative attitude.

Thanks to the Singer’s career in the music world, Bradbery holds a Net Worth of $300 Thousand.

She likes to treat herself to holidays and luxurious rides.

In addition, Bradbery has been fine-tuning her unique style since winning Season 4 of NBC’s The Voice.

She has received several award nominations and performed worldwide with Kane Brown, Blake Shelton, Brad Paisley, Miranda Lambert, and others.