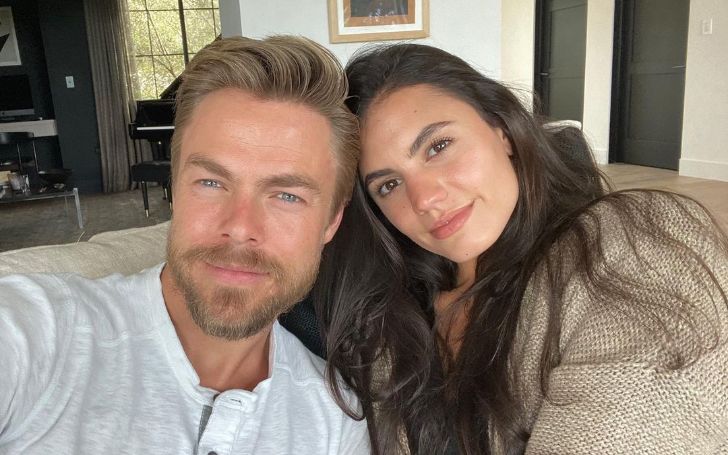 Derek Hough was a  professional dancer on the ABC dance competition series Dancing with the Stars. He won the show a record-breaking six times and received eleven nominations for the Primetime Emmy Awards for Outstanding Choreography, winning three times.

Later, Derek was honored as a judge on the series, beginning with its 49th season.

He is indeed an incredible man. If you’ve ever seen Derek Hough perform, you know he’s got some insane talents. However, it looks that he is also exceptionally smooth in the love zone.

So, want to know who Derek Hough’s girlfriend is? This page is just for you!

Who is Derek Hough Dating?

Dancing with the stars, Judge Derek Hough is dating the fellow dancer Hayley Erbert! She is a professional from Topeka, Kansas. Erbert has been dancing since she was three years old.

Moreover, Hayley has been a troupe dancer on Dancing with the Stars since season 21.

She rose to stardom after competing on FOX TV’s So You Think You Can Dance. Being named one of the top three females opened doors to more opportunities and received more dancing gigs. Dancer Hayley is also involved in the film industry.

Together for almost a decade?

Derek and Hayley have been in a very healthy relationship for six years now. The pair met on Dancing with the stars and danced their way into each other’s hearts.

They even danced to Ed Sheeran’s Thinking Out Loud on DWTS Live in 2015 and gave DWTS viewers an exceptional performance during season 29.

They officially started dating in 2015 and have been together ever since. There is so much love between them, as we can see clearly on Derek and Hayley’s Instagram posts. They are constantly posting adorable lovey-dovey pictures of them.

Derek and Hayley are so madly in love that it is insane. Looking for a peek into Hough and Erbert’s love life? There’s a YouTube channel focused on this!

The gorgeous couple launched a youtube channel a year ago as Derek & Hayley x Dayley Life. It has 130k subscribers and millions of views. There we can be a part of their life full of adventure, Dancing, cooking, love, and lighthearted fun.

Do they plan on marrying?

Everybody from the fans to their family knows the couple and literally can’t wait for their marriage. But do they genuinely intend to marry? Hmm, not anytime soon, though.

Following Julianne’s wedding in 2017, E! asked Derek if he would be next. Guess what an answer was? It was indirectly “NO.”

“It’s not something we talk about a lot right now,” he explained. “It was a fantastic week being with Hayley and experiencing love.” Nonetheless, he continued, “I don’t want to be an old grandpa when I have children… After that wedding, I’m like, ‘Who knows?’ You feel the love.”

In July 2018, Ryan Seacrest directly asked Derek if he was thinking about getting engaged, and Derek responded: “Yes,  sometimes.  But you know what’s amusing?

There are so many people getting engaged and married in my group right now that I’m just letting them enjoy it while I wait for my turn. We’ll have to wait and see what happens.”

Yes, we have to wait for the wedding bells to ring.