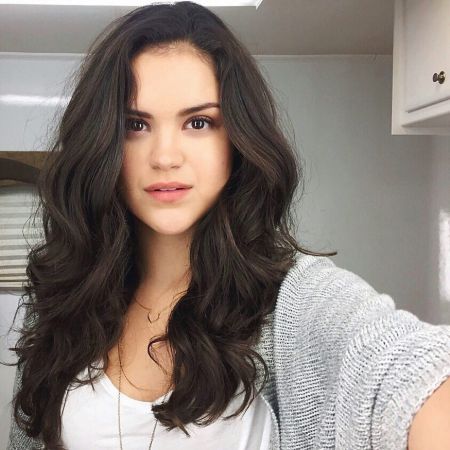 Have you watched this series full of  Action, Romance, and Supernatural horror Teen drama, none other than Teen Wolf? If you have, you’re probably familiar with Victoria Moroles as she played Hayden Romero from Season 5 to the first half of Season 6.

Born on September 4, 1996, in Corpus Christi, TX, Victoria Moroles is an incredible actress. Besides, she is a breathtaking model and a dancer.

This gorgeous actress is well known for her roles as Andie on the Disney Channel’s television series Liv and Maddie.

However, Victoria is massively known as the Werewolf Hayden Romero on MTV’s supernatural drama Teen Wolf.

Actress Victoria Moroles started her acting career at the age of twelve. As family art businesses surrounded her, Victoria was fascinated with dance.

As a result, it led her to greater opportunities. The actress eventually got one in South Texas and led her to LA to begin her acting career.

First, Victoria appeared in a short film, Liberty Lane as Wendy, in 2009. Since then, the actress has appeared in numerous films and Tv Series.

Victoria can be seen in ten films and seven Tv series to date. Most recently, we can see the actress’s amazing acting in the movie Plan B, released on May 28, 2021, by Hulu.

As we ponder, what might be the Net Worth of the actress also her income, earnings and salary; we got you everything here!

Victoria Moroles Net Worth is $2 Million!

Teen wolf actress Victoria holds a staggering Net Worth of $2 million. She accumulates this hefty fortune from her successful career as an actress.

All the fortunes credit goes to her movies and Tv series. Moreover, as per the sources, the average salary of an actress is $91,401 in the United States. No doubt, Victoria is loving her profession and lives a lavish life!

Victoria Moroles’s movies are Liberty LaneThe Wicked Waltz, The Faithful, Maddoggin’, The First Hope, Is That a Gun in Your Pocket?, Spook, Killer Date.

Aside from this, the most notables are Down a Dark Hall and Plan B. We can see more of Victoria Moroles in the upcoming movie, Snow Falls.

In the same vein, We can see Moroles’s appearance in Tv series such as Cloud 9, Legends, Liv and Maddie, Sleep Tight, Here, Now, and CSI.

Who is the actress dating? Dylan Sprayberry?

It’s not always what we see on screen. Many fans speculated that Victoria and Dylan were dating back in 2015 as they played the couple’s role on a teen wolf.

They had great chemistry and a slightly risqué scene.

As the scene is just a scene, Actress Victoria wasn’t dating a handsome hunk, Dylan Sprayberry. So is the actress dating anyone as of 2021?

In addition, She has a pearly smile with dazzling brown eyes and black hair. Who wouldn’t date such a beauty?

As per Moroles’s Instagram, it seems that the drop-dead gorgeous actress is dating a cute guy, Jordan Wilson. However, Victoria hasn’t made a clear confirmation regarding her relationship and dating stuff.