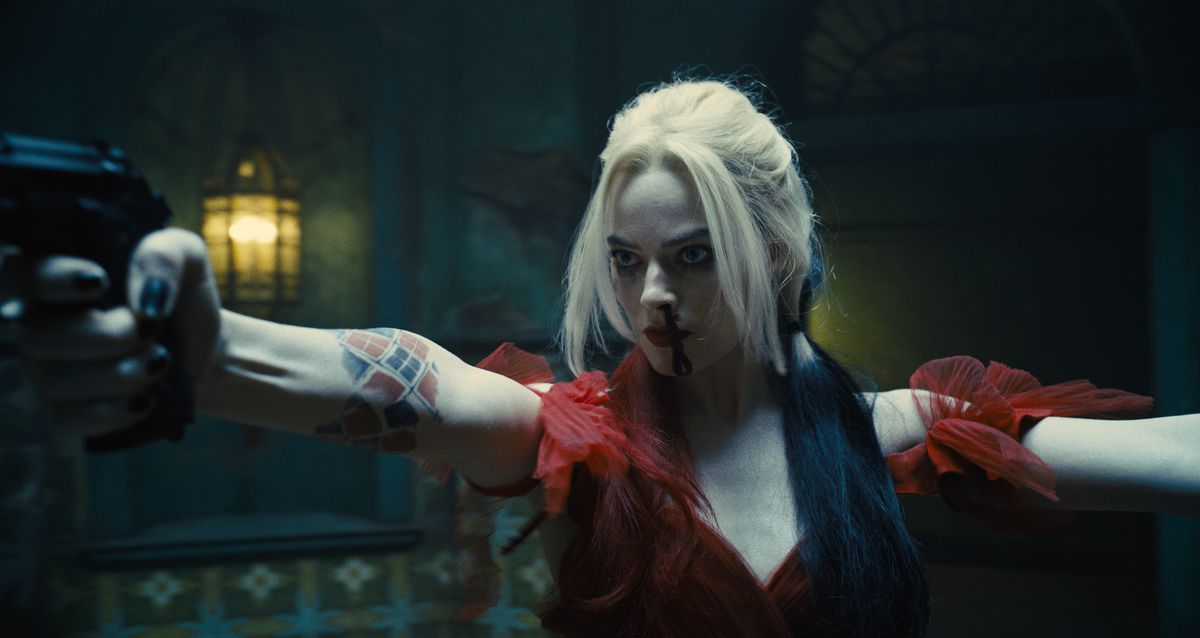 Supervillains Harley Quinn, Bloodsport, Peacemaker and a collection of nutty cons at Belle Reve prison join the super-secret, super-shady Task Force X as they are dropped off at the remote, enemy-infused island of Corto Maltese.

In July 2018, a year after the success of Guardians of the Galaxy Vol. 2, James Gunn lost his job at Marvel. The former shock-horror provocateur, who adapted his lessons from the transgressive Troma Entertainment for mainstream efforts like Slither and Super, became the target of right-wing trolls who surfaced old, offensive jokes, some going back a decade. Disney, kowtowing to the bad-faith outrage, severed ties with him. Then a year later, after colleagues rallied and clarity settled in, he got the job back. But in the interim, he began work on what would become The Suicide Squad.

Like the article-less 2016 Suicide Squad film, The Suicide Squad is a movie about imprisoned DC Comics supervillains coerced by the government into joining Task Force X, a secret division that sends its inductees on dangerous black-ops missions that are mostly expected to fail. Task Force X members are lured into service through blackmail or the promise of a reduced sentence, and kept in line with explosives implanted in their necks. The best version of a Suicide Squad story is often a meditation on what it means to be completely expendable, and perhaps irredeemable in the eyes of society. In the world of blockbuster Hollywood filmmaking, where almost anything is permissible as long as profits and acclaim follow, James Gunn is a rare case: A high-profile man who, when confronted in bad faith about past indiscretions, still expressed regret about that past, and had a track record that appeared to prove a sincere desire to change. For this, the filmmaker is back to making studio tentpoles largely without controversy.

This makes Gunn’s interpretation of The Suicide Squad, which he wrote and directed, doubly interesting. The real-world resonance between the story being told, and the person guiding its telling, adds another layer of potential richness. Gunn, for a time, was uniquely aware of how expendable he was. And The Suicide Squad is thoroughly focused on notions of expendability. It’s also violent, perversely comedic, and despite pacing issues, an impressive effects-driven spectacle.

The film centers on a single mission set on the fictional island nation of Corto Maltese. A military coup on the island has led to the installation of an anti-American government, which now has control of a still-active Nazi-era research facility housing something called Project Starfish. The American government, concerned about what the facility may hold, authorizes Amanda Waller (Viola Davis) to send in Task Force X to blow it the hell up.

This iteration of Task Force X is, frankly, huge — mostly to accommodate the high body count The Suicide Squad’s premise demands. Without suggesting who survives and for how long, Gunn has assembled a fun array of decently well-known villains like Harley Quinn (Margot Robbie), King Shark/Nanaue (performed by Steve Agee, voiced by Sylvester Stallone), and Captain Boomerang (Jai Courtney), along with obscure picks like Polka-Dot Man (David Dastmalchian) and Weasel (Sean Gunn). All are smartly deployed, for reasons either purely comedic (an abrupt death), emotional (a surprisingly touching scene), or both (a surprisingly touching scene immediately followed by an abrupt death).

It’s barely worth mentioning how the new film compares to the first Suicide Squad film. According to reports, director David Ayer’s 2016 effort, while profitable, was also heavily compromised by studio interference, and that showed onscreen. The Suicide Squad maintains a cheeky sense of plausible deniability when it comes to continuity. It neither confirms nor denies the events of the first film — which several cast members return from — and it doesn’t address its status in cinema’s wider DC Extended Universe. Refreshingly, like most post-Justice League DC movies, it’s designed as a standalone film that’s tonally unique from its siblings.

Gunn’s Suicide Squad features comedic R-rated violence, but it also comes with occasional visual flair: One fight scene is depicted via the reflection in a character’s helmet, the camera circling around it to follow the combatants around the room. There’s some particularly arresting imagery, like the eventual reveal of what’s behind the curtain at Project Starfish. But at 132 minutes, The Suicide Squad has a little too much space between impressive setpieces, character beats, and comic moments, considering the ostensible focus of a plot that’s effectively summed up as “Get in, get out, get fucked.” The film drags, even if what’s there is frequently fun as hell.

Much like Guardians of the Galaxy, The Suicide Squad is exceptionally good at taking mismatched characters and making them gel thanks to the strength of its script and well-calibrated performances. (And as a second crack at the same set of DC characters, it’s a bit of a miracle.) Idris Elba’s Bloodsport is likable but also impressively mean, a noticeably gruff upgrade from Will Smith’s almost noble take on Deadshot from the first film. John Cena’s Peacemaker is one of the best blockbuster performances yet from the wrestler-turned-actor, with hilariously steely charisma that makes his F9 role all the more disappointing in retrospect. Returning players like Margot Robbie’s Harley Quinn continue to deliver, and Joel Kinnaman’s Col. Rick Flag is noticeably reworked to be much more sporting than he was the first go-round.

There are too many characters in The Suicide Squad to give them all their due here, but perhaps the best collective praise the ensemble garners is also a simple one: It’s a movie where most of the characters involved can believably be someone’s favorite. It’s not all thanks to jokes and bickering, either — the action setpieces are big and evenly distributed among the squadmates, and while there’s plenty of visual effects involved, an impressive number of them look like they’re built around real people doing real things, making The Suicide Squad an uncommonly grounded action blockbuster. Coupled with Gunn’s penchant for cheeky, on-the-nose needle drops (the film’s opening prison scene is set to Johnny Cash’s “Folsom Prison Blues”), unsettling cartoonish monster design, and a driving, bass guitar-heavy score from composer John Murphy, when The Suicide Squad gets moving, all that matters is that we’re about to see some dudes get wrecked.

Comparing The Suicide Squad to Guardians of the Galaxy is a bit hard to avoid, especially since Gunn has such a well-defined sensibility that has now been applied to make unlikely crowd-pleasers across two mega-franchises at competing studios. Mostly, as above, the comparison is favorable — but other times it isn’t. The Suicide Squad is at its best when it’s doing things that Marvel Studios will not: R-rated action comedy, setpieces that prioritize performers over computer effects, and a story that isn’t afraid to gesture at real-world geopolitical conflict. It’s at its weakest when it embraces a Marvel-style ending, filing away its rough edges to deliver a sentimental finish that leaves the status quo more or less intact for potential future projects.

Given the wealth of superhero adaptations in movies and TV, it can seem creatively bankrupt to give another shot to a franchise where the last film, while profitable, was pretty universally reviled. All films must make an argument for the viewer’s attention, and a franchise do-over is not a terribly compelling one. However, as The Suicide Squad enters its final act, Gunn gives his violent antics a surprising weight, as his film acknowledges the loaded imagery he’s playing with. The Suicide Squad contemplates the horror of treating lives, however irredeemable, as expendable. It extends that horror to the real-world parallels of its plot, which treats a people, a nation, as expendable, recalling decades of secret and not-so-secret U.S. meddling in the affairs of Latin American nations. It leans into the ugliness of Task Force X, where the carceral system makes it so that the film’s very premise can even happen without much justification in the first place.

Then The Suicide Squad cranks up the volume and lets the credits roll without saying much else, electing to center its climax on a feel-good character beat about irredeemable outcasts learning their worth instead of interrogating the more structural ideas it raises throughout. It’s satisfying enough, but it also feels like a cop-out, one that leaves just enough room for a sequel to do it all again, to much the same ends. It’s the unique trap of a franchise like Suicide Squad: much like other superhero films require audiences to accept dressing up as a vigilante bat is an acceptable response to trauma, the Suicide Squad will always be about immoral people trapped in an immoral game, using villains to jeer at the villainy of the institutional powers that weaponize them.

In the open-ended and endless realm of comic books, returning to this well over and over again is the nature of the beast, repetition and reinvention are the stock and trade of a serial medium. In movies, though, where closure is expected, it’s just another reminder that in 2021, the only thing not expendable is intellectual property. The Suicide Squad arguably would have happened without James Gunn. The movie he got to write and direct feels like the satisfying product of a man grateful to make it, and not a bold, potentially alienating vision from someone well aware they may not get another chance.

Who is Alexandria Williams, what is her Job, is she on linked in?