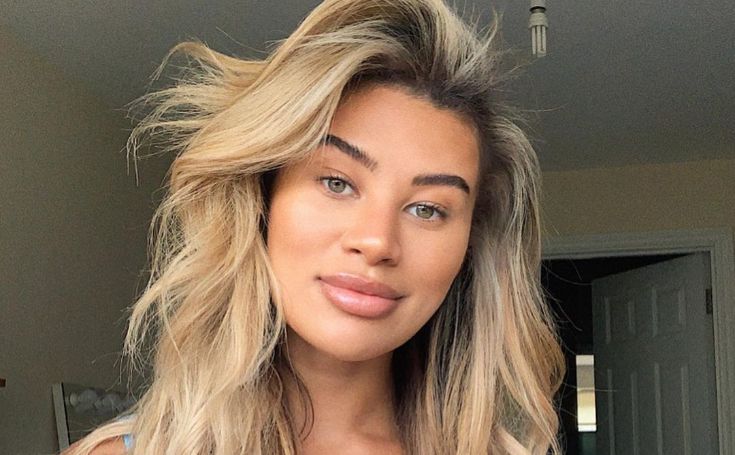 Moreover, she rose to fame after participating in the dating reality television show Love Island.

Also, she shares lots of pictures on her social media platforms related to fashion, lifestyle, and travel content.

Montana was born on August 29, 1995, in Hertfordshire, England, the United Kingdom, under the zodiac sign of Virgo.

Likewise, she took birth in a middle-class family. However, she hasn’t shared any information about them. As per online sources, her father is a businessman, and her mother is a homemaker.

And she has a younger brother named Dylan. Glancing at the British actress’s success and popularity, we assume that her parents raised her well in her hometown.

Talking about her academic background, the model studied and completed her schooling at the Abbot’s Hill School in Hemel Hempstead, England. During her school days, she participated in many competitions as choirs against other choirs and various sporting events.

Later, she enrolled at the Berkhamsted School in Berkhamsted, England, in 2011 and graduated in 2013. After that, she attended Bournemouth University to learn more about advertising, Public Relations, and Applied Communications.

Montana took a month-long Public Relations internship in May 2014 at ILS Foundation in Woburn, Bedfordshire, and later took up another internship for a month at Global Radio.

In November 2014, she started working as a Beauty Advisor for the Estee Lauder Companies in Bournemouth and as Cluster Conference & Event Sales Trainee for the popular hospitality company Hilton Worldwide in July 2015.

After that, she served on another internship at entertainment agencies like DDA Group and Cirkle. And, she entered as a Client Services Executive at Fidelium Financial Planners Limited before joining Love Island.

The British actress appeared and competed in the popular dating show Love Island in 2017 but didn’t find romance in the first few weeks, but started dating Alex Beattie.

Unfortunately, Rose exited the show on the 50th day and won a fifth place on the television show. Then, she appeared on several television shows like “Loose Women,” “CelebAbility,” and “Celebrity Island with Bear Grylls.”

And she found it hard to survive in Bear Grylls’s “Celebrity Island” and walked out of the show after shooting for a few days.

Similarly, she worked as a presenter on MTV and for the popular British series This Morning. After that, the star became a popular blogger and Instagrammer, amassing millions of followers on the internet.

Further, her blog Life of Mon has several parts like “Fitness,” “Music,” and “Fashion,” where she stakes her experience on several topics.

Also, she is popular on Instagram, where she has over 1.3 million followers and over 262 thousand followers on Twitter. Additionally, she also has a self-titled YouTube channel with over 91 thousand subscribers.

Love Island’s Montana Brown opens up about drugs and pitfalls of fame.

Brown’s TV reality star said she’s always been a ‘bit of a grandma’ but was exposed to a passionate new world after finding fame on Love Island. Moreover, she has opened up about her struggles with the dark side of celebrity in a candid video chat with fans.

Rose shot fame in 2017 as a contestant on the third series of ITV2’s juggernaut dating show Love Island.

She was bi ed as the ‘smart one’ in the villa, having just completed a degree in economics at Bournemouth University before being asked to participate.

After leaving the show, the star was immersed in a whole new celebrity lifestyle that she didn’t take naturally to.

And. she insists she’s usually been ‘a bit grandma’ and struggled in situations when she was surrounded by drink and drugs while going out.

And, the actress stated that she felt the glare of being in the public eye as soon as she was released from the Majorca compound.

Who is Montana Rose Dating?

The 26 years old multi-talented lady is one of the luckiest women on the earth, having an intimate relationship with well-known celebrities like professional athletes like soccer player Kieran O’Hara, Irish Rugby player Conor Murray, and English rugby union player Maro Itoje before entering Love Island.

In the show’ Love Island’, she met Alex Beattie and started dating him, but the couple broke up soon after exiting the show.

According to online experts, she is currently in a romantic relationship with hunky rugby player-turned-real estate executive Mark O’Connor.

Apart, Montana is a travel freak who loves to travel around beautiful places. Until now, the entrepreneur has been to various places around the world.

Also, she is a very photogenic person who loves to take a picture of herself and share it with her fans and followers on her social media platforms.

Nonetheless, social media influencer prefers to stay away from rumors and controversies.

However, Montana hasn’t revealed her net worth to the public until now.

Calculating all of her income and earnings at once, the estimated net worth of Rose is around $3 to $4 million US dollars. Also, an Instagrammer is still present in her work, which leads to her net worth increase in the upcoming days.