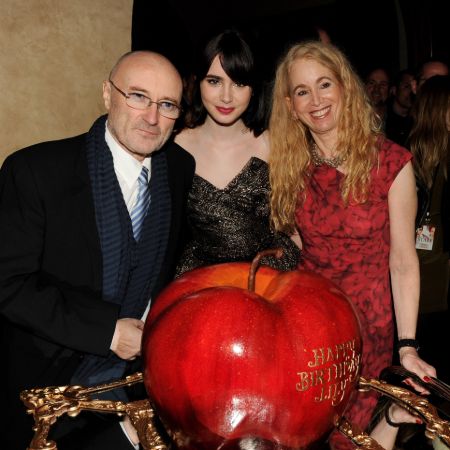 They say, If you dream of earning fame and reputation in life, you should know that the road to fame isn’t a cakewalk. Anyway, it was quite a piece of cake for Jill Tavelman. Jill Tavelman rose to the forefront after marrying the legendary musician Phil Collins.

Collins is one of the best-selling musicians of the time and the most successful British pop performer ever. He is beyond just a musician. Phil is an incredible actor best known for Buster, Hook And the Band Played On, and many more. Moreover a fantastic writer.

As a result, he is the author of The Alamo and Beyond: A Collector’s Journey and Not Dead Yet: The Autobiography. Further, Learn about Phil Collins’s wife!

Most of you probably know that Legendary musician got married and divorced thrice. His first wife is a former actress, Andrea Bertorelli. They remain married from 1975 to 1980. Likewise, Jill Tavelman is his 2nd wife.

Jill and Phil initially met in 1980. Phil ran across jill at Los Angeles pub while promoting a Genesis record in the United States. Collins introduced himself as Bill Collick to jill at first to not associate him with his rock star fame.

A few months later, Phil asked Jill to go with him to England. She consented, and the couples lived together.

They dated for nearly three years before choosing to marry. Finally, the couples walked down the aisle on 4th August 1984. After five years of marriage, Jill and Phill gave birth to their daughter Lilly Collins on March 18th, 1989. Lily is a gorgeous model and an actress.

Unfortunately,  Jill and Phil terminated their marriage after being together for more than a decade. Phil was no longer in love with Jill and filed for divorce finalized in 1996.

Jill Tavelman was born on April 9, 1956, in Los Angeles County, California, USA. Jill’s father was a Canadian Jewish. He was the owner of a men’s clothing store in Beverly Hills, California. Her mother got involved in the entertainment industry. Moreover, she played various theater films.

Jill is a 65-year-old woman who is fascinated by anything that has a history. She is a former president of the Beverly Hills Women’s Club and an actress known for Extra with Billy Bush. Currently, Jill fancies herself a purveyor of resurrected oddities.

Therefore, She founded an antique shop, WAVERLY ON DOHENY, in 2014. Since then, she is enjoying her job as the owner of the shop.

The net worth of Jill Tavelman estimates at $25 million. Moreover, she got a £17 million payment as a divorce settlement from Phil.

Furthermore, Collins has a fortune of £120 million, as per the Sunday Times Rich List of 2018, making him one of the 25 wealthiest people in the British music industry.

Likewise, Her daughter holds a Net Worth of  $25 million. As an actress, Lily has appeared in many notable film and television projects. In addition, the Majority of her revenue gets credited from acting and modeling.

She has worked with large fashion corporations like Chanel. Therefore, she was honored with the International Model of the Year in 2007 in Glamour magazine.

In conclusion, Jill Tavelman is a proud mother and lives happily.